«The public has the right to say a word about the planning of this resort and its safety, environmental friendliness in a mountainous region, which is sensitive to unwanted environmental changes.»

This scandalous project first came to light in 2016. It would be bigger and more luxurious than the « Bukovel » ski resort, the best known resort in Ukraine. Guenady Moskal claims in the media that 5000 jobs would be created. Finding work close to home of course appeals to many local inhabitants who have to leave the region to seek seasonal work elsewhere. At the beginning of 2017 public hearings were organized by the local authorities of the Tyatchiv and Rakhiv districts with the aim of obtaining agreement for this project in Yassinya, Tchorna Tissa and Lopukhovo, the three villages directly affected. All of this is to be financed by unknown investors whose identity he refuses to reveal. 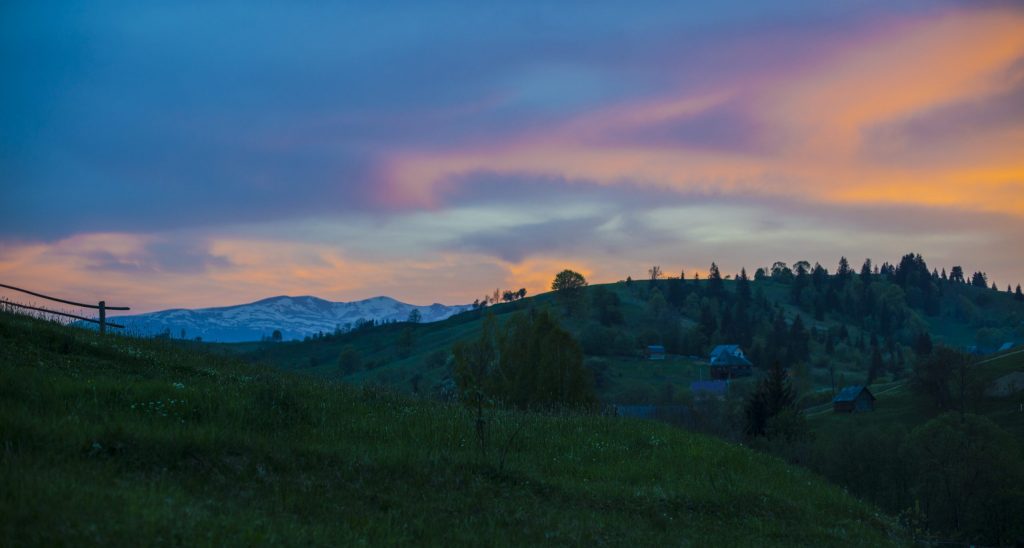 Due to the lack of transparency, Ostap Yednak – Member of Parliament and anti- corruption activist – sent a request to the competent authorities for the publication of all information related to the Svydovets project. In response, the Tyachiv District State Administration revealed the following:

On April 21, 2017, according to the Instruction of Head of State Administration No. 152, on the basis of a request from Skorzonera LLC a decision was made about the development of a detailed plan of Svydovets tourist and recreational complex outside the locality. Tyachiv District State Administration was named as the commissioner.

This statement proves that the company Skorzonera LLC is behind the planned mega ski resort. Since Skorzonera LLC is the owner of Bukovel ski resort in the Ivano- Frankivsk region, this information is hardly surprising. However, the authorities have repeatedly denied the existence of an investor at the current stage of the project. The following section reveals the background of Skorzonera and the investors behind the Svydovets project. Skorzonera LLC is a Ukrainian company with its main office in Polyanitsa in the Ivano- Frankivsk region. The company was established in 2000 for the construction of the Bukovel ski resort.123 The main purpose of Skorzonera LLC, which has an authorized capital of 154’797’333 UAH (approx. 5.8 Mio USD), is the ‘rental and operating of own or leased real estate’. The beneficial owners of Skorzonera are Ukrainian oligarch Igor Kolomoisky and his business partner Gennady Bogolyubov. The shareholders include the companies Derlinh LLC (91.4%), Maveks LLC (6.5%) and Halychyna-zukor LLC (2.1%). Derlinh LLC is beneficially owned by Igor Kolomoisky and Gennady Bogolyubov. Halychyna-zukor LLC is owned by Tetiana Shevchenko, the wife of Oleksandr Shevchenko who is a Member of Parliament and said to be Kolomoisky’s right-hand man. Maveks LLC is owned by five offshore companies based in Cyprus whose ultimate beneficial owners are not publicly known.

one of the activists from the village of Lopukhovo

«we learned that the public hearing had been held in Lopukhovo once it was already over. There was an announcement in the newspaper but nothing about the fact that a vote was going to take place for or against the Svydovets project. Only twenty people voted in favor, manipulated by the municipality and local administration. They decided for the whole village.»

Most of the skiing areas that have been developed in the last years are located at less than 1‘500 meters above sea level. According to climate change models, skiing at this altitude will become economically unviable already within a few decades. 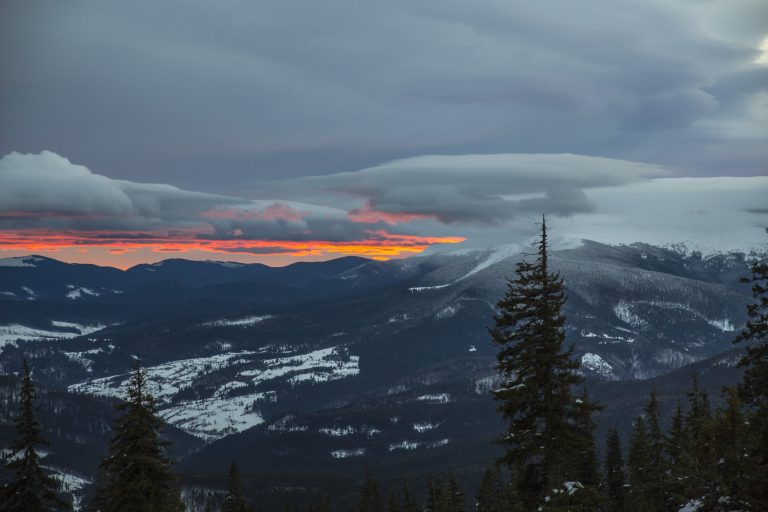 creation of the «Free Svydovets» Group

Several citizens of Lopukhovo got together and lodged a legal complaint in the administrative court. They are not very numerous, but they are very determined. They all work in the timber and forest sector, in local sawmills or as woodcutters, as do 70% of the inhabitants of these villages. It is not the first time that they have contested the « State system ». For over twenty years they have been regularly protesting against bad forest management and the corruption rife in the State forest service. They in particular denounce woodcuts carried out for false sanitary reasons.

They have called on lawyers, ecological organisations and local and national members of parliament to help them. To begin with, nobody wanted to get involved, but then a young environmental law student decided to take up the struggle. She mobilised several NGOs, including Environment People Law, Zeleny Dossier and the European Cooperative Longo maï. Together we set up the «Free Svydovets Group” which began to contest the project in July 2017. 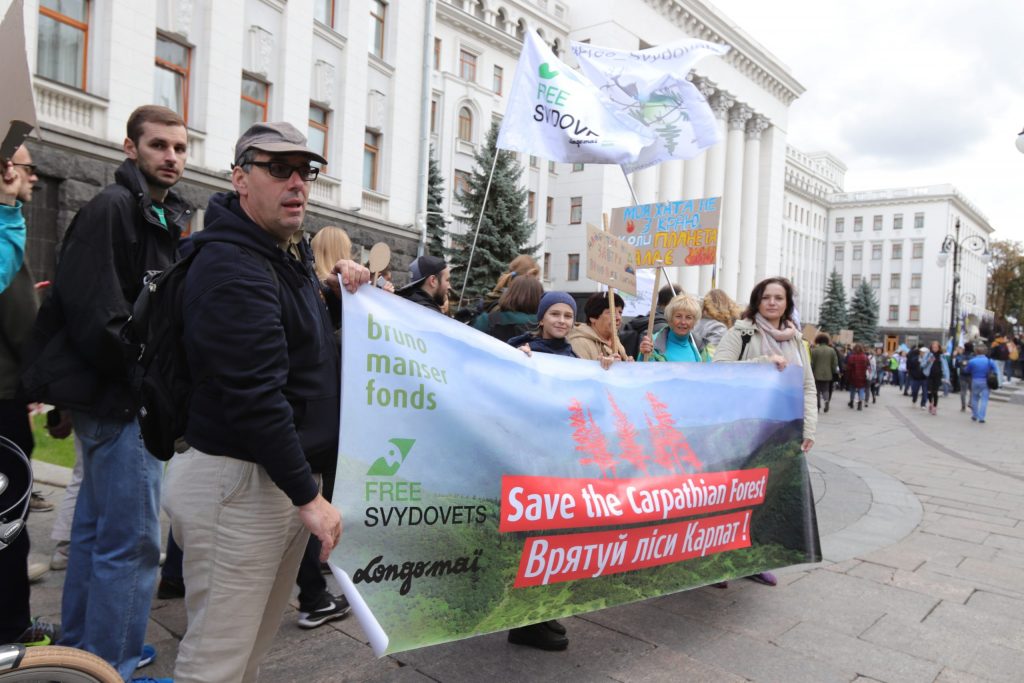 We have lodged a legal complaint against the project. The first court session took place on 14 November, 2017. The presidents of the two districts concerned did not deign to show up and their lawyers did not come either. On the other hand, twenty activists attended and a national television channel filmed the event. The judge listened to our ecological arguments and decided that this case would be heard by three judges. This is rare, and generally helps to reduce the risk of corruption.

During a recent meeting in Lillafüred (Hungary) of the Framework Convention on the Protection and Sustainable Development of the Carpathians we denounced the fact that Ukraine is violating its obligations with regard to sustainable tourism. We called for a commission of inquiry by the Ministry of Ecology, but have so far not received any response. Many people have expressed their support via Facebook – to such an extent that the governor felt obliged to issue an official communiqué calling on people not to give credence to the activists’ arguments. The day after they lodged their legal complaint each of the three main leaders of the campaign in Lopukhovo was subjected to controls by work inspectors. They have also regularly received telephone calls threatening them with dire consequences if they do not give up the struggle.

For the moment the movement of opposition remains strong and every day new people join the Free Svydovets Group. It is, however, clear that we are still a minority among the local population. Many agree with us but do not dare go against the authorities or are subjected to the influence of their employers. They also fear the power of the hidden investors. For all of these reasons we call on citizens from all countries, on national and international NGOs to support our campaign for a free and natural Svydovets massif.